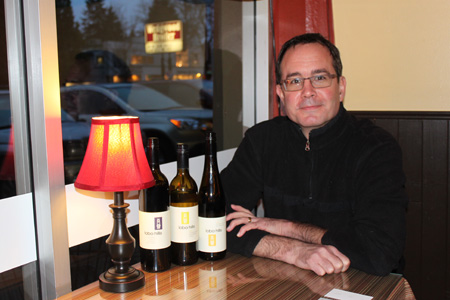 After a bike crash which broke his spine, Tony decided to return to his core values of spending his life in a community with friends and family, drinking wine and eating food.

Tony attended the Northwest Wine Academy, focusing on wine making. His wine roots go back to his college days where he ran tours out of one of California’s first wineries, Almaden Vineyards in San Jose, California. From there, he traveled to Sweden, Denmark, England, Scotland and the Netherlands, before returning to San Jose and J. Lohr Winery. There, he ran the tasting room and served as Hospitality Director. One day, bored with tasting rooms, he bought a VW van – inspired by On the Road and Travels with Charlie and toured the country before settling in Seattle. This is where he found wine to be the most promising. He served briefly as a wine steward at the world-renown Canlis Restaurant, left to write, wrote, and now he’s back in the business, but this time making wine… wine that he hopes you find to be full of promise and flavor.